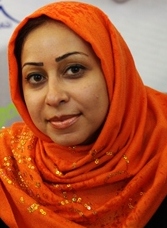 Erfan Nazar Ahari, writer and poet, was born in Tehran in August 1974. She has a PhD in Persian language and literature and has done some research in this field as well.

Nazar Ahari, now a PhD student of philosophy, not only writes but also teaches at universities and other academic centers.

One can see the trace of Nazar Ahari’s field of studies in her works, which have a mystical essence and thrive on traditional Persian literature. Both in her poetry and in her stories, she tries to take young adult readers into her inner world and let them explore it. The concepts seen in her works are global ones dealing with the lost spirituality of modern individuals.

She is one of the authors of the book entitled The Story of Peace that is published in South Korea. Her works are translated into other languages as well.

Leili Is the Name of All the Girls on Earth (2004), Saberin Publishing Co. (Daneh Books)

A Whale Is Beating in Your Chest (2006), Saberin Publishing Co. (Daneh Books)

Write on the World’s Blackboard with the Chalk of Light (2009), Nooronar Publishing Co.

Two Days till the End of the World (2010), Nooronar Publishing Co.