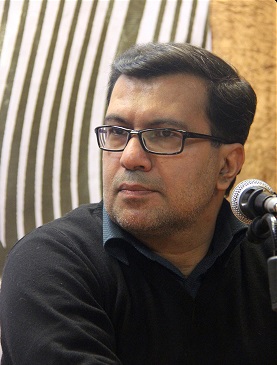 Hamidreza Shahabadi, writer and scholar, was born in Tehran in June 1967. He has a master’s degree in history and started writing for children and young adults by publishing a story in 1989.

Besides writing stories, he has made a few short movies, written plays, taught story writing, and been the production manager and deputy manager of the Institute for the Intellectual Development of Children and Young Adults (Kanoon) Publishing, which is the most important and the oldest state-owned publisher.

Shahabadi is one of those young adult writers who write for adults as well and his novels are based on his researches about historical events. For example, his young adult novel entitled Lullaby for the Dead Girl is about Ghoochani girls being sold during Qajar reign. His interest in history has brought history and narrative literature together. In most of his stories, he has a historical outlook and in telling his stories, he puts the action and characters in a historical context, while remaining faithful to documented facts.

The Confessions of Slaves (2008), Kanoon

Constitutional Period (from the collection The Story of Iranian Intellect / 2009), Ofogh